The oldest written reference to Lubber Run dates from 1815 when it was referred to as Lovers Branch of Four Mile Run. According to the Arlington Historical Society’s book “Why Do We Call It …?” (Alice Andors, editor; 2010), the original name was likely Love’s Branch named after the prominent local Love family. An 1837 reference refers to it as Lubber Branch.

Lubber Run starts near Woodlawn Park in the Waycroft-Woodlawn neighborhood, then flows under I-66 through the Ballston Beaver Pond and then through the Bluemont neighborhood entering Lubber Run Park under the North Carlin Springs bridge over North George Mason Drive. Lubber Run then flows under Arlington Boulevard and terminates at Four Mile Run. Colville’s Mill, built around 1754 for grinding corn and wheat, once stood beside Lubber Run just upstream of its confluence with Four Mile Run.

Lubber Run Park became Arlington County’s first public park on October 9, 1942 with the land donated by the Meadowbrook Construction Company which built the Arlington Forest
neighborhood between 1939 and 1946. The park has trails, a large picnic shelter, grills, and picnic tables. The Lubber Run Amphitheater, inaugurated in 1969, offers summer musical performances under the stars. Foxes frequent the park and deer are sometimes present.

The Federal Emergency Management Agency calculates that the “hundred year flood”
will place 12 feet of water at the north end of Lubber Run Park, 28 feet of water near the
amphitheater, and 39 feet of water at the southern end. At that point, constrained by the culvert at the south end of Lubber Run Park, the water level will rise until it flows over Arlington Boulevard at the foot of North Edison Street and forms a 42-foot- high waterfall down the other side of the highway as the water rejoins Lubber Run for the short distance to Four Mile Run.

Check out our map with parking areas marked, or visit our About page for more info. 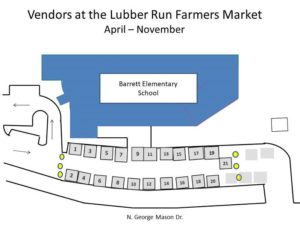 Our market is powered by volunteers. Each week, a small crew sets up the market, runs the market booth and breaks down at the end of the day. Interested in helping out? Please email lrfmvolunteer@gmail.com. Thank you!

April through November
Saturdays from 8 AM – 12 PM 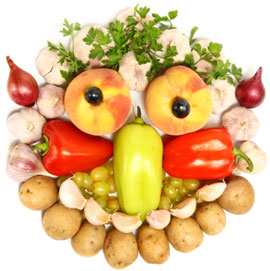